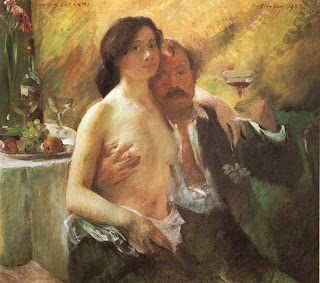 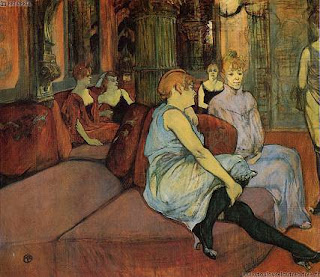 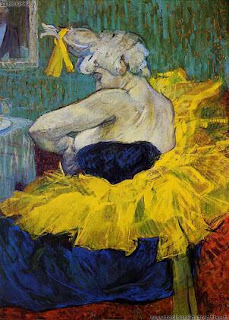 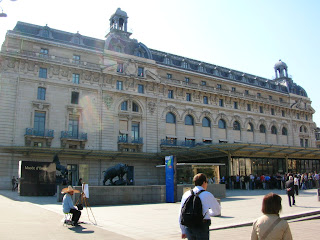 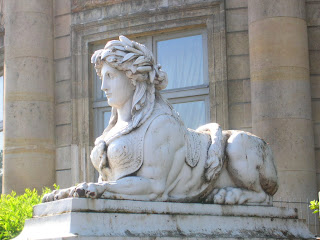 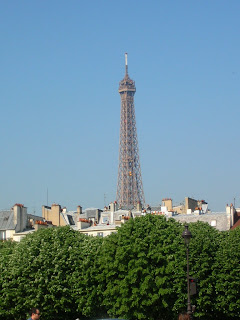 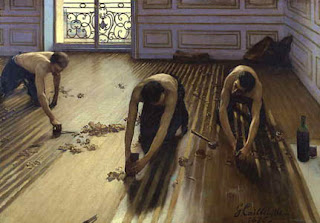 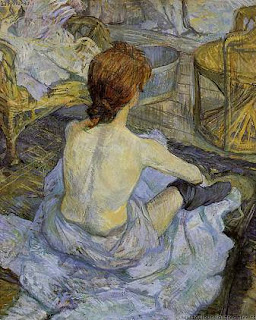 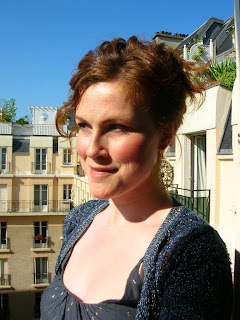 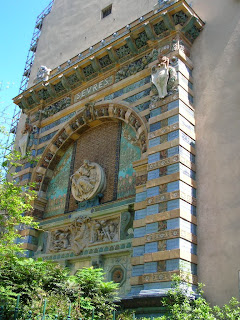 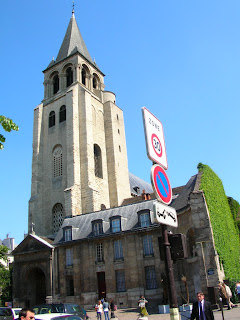 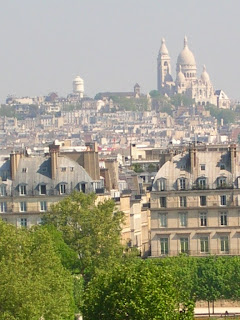 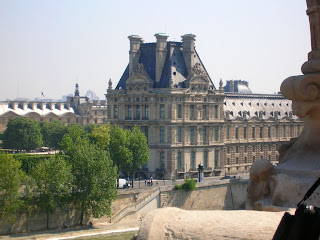 Yesterday I visited Musee d’Orsay, which was the realization of a huge dream. Blessedly, it was fairly quiet when I first arrived there, and I was able to explore the Impressionist paintings fairly unscathed. The Toulouse Lautrec room was out of this world. The lights were very dim because they are mostly watercolors and pastels which are easily damaged by harsh light, but they were breathtaking. It made me quite emotional, actually. To see these images that have been so hugely inspirational in my life, in the city where they were painted, while I’m living in the very neighbourhood were they were conceived was just too much. I felt more reverance and humility than any old cathedral could ever conjure. It was an experience I will remember for the rest of my life.

The other tourists seemed to be having a very different artistic experience. It seems that in order to prove to themselves, and their friends that they had taken in culture, they needed to pose in front of each painting, and either look ridiculously goofy, or stoic and pensive while having a photo snapped. Other people were taking photographs of the art itself. I just don’t get it. You come to this place to see first hand these exquisite works that have sparked a new movement in art history. You can see every line, and every brush stroke, and the colour is so vivid and alive, and somehow you need to experience that through the lense of a camera? Were we not built with two perfectly lovely lenses of our own to experience the world? Don’t we also each have a pretty decent hard drive onto which we can store all of the images we capture? Also, when you position your obnoxious ass in front of a painting trying to shoot your stupid friends who are making the rock and roll sign with their fat, meaty hands, you are in my way. By the way, in case you haven’t already realized this, the images above are from the internet. I didn’t shoot them in the museum, but I did see the originals there. What I did shoot was the beautiful architecture (d’Orsay used to be a train station) and the view from the roof top terrace, where you can see my neighbourhood and Sacre Coeur.

The Van Gogh paintings were something to behold. I’ve never been a huge fan of his work, but to see the incredible texture and detail in real life really made my heart sing. The Degas exhibit was lovely, and I also found two artists I’d never heard of who really are incredible. One is Gustave Caillebotte. Check out his Raboteurs de parquet above. The other was in a special exhibition and is an expressionist painter named Lovis Corinth, depicted above in a self-portrait with his wife. That looks like a happy marriage to me!

I was pretty exhausted after d’Orsay, so I sat down at a bistro and had a little lunch and un verre du vin rouge. I also tried foie gras au cannard. If you think too much about the ingredients, it’s a bit scary, but it really, really is out of this world. I was very, very happy after that.

I then wandered around St. Germain, which was full of lovely shops. If I had a lot of money, I could spend it beautifully in Paris. I did splurge a little and bought myself a French perfume. I almost walked out of the store right after I entered, because there was a general smell of an overly-scented grandma, but then I saw this tiny little bottle with a purple ribbon. The label said “Violet”, which when said en Francais actually has three syllables, and is so pretty! It smelled very sweet and floral to me, but I spritzed some on my wrist, and then headed off. After it had settled, it evolved into this delicious sweet, clean, peppery smell that I couldn’t get enough of. My hope is that I can use it for good, not evil, but with power like that you can never be sure which way it will go.

I took some photos of the church at St Germain du Pres. It’s ancient, and very pretty.

Last night I went to see my friend Lenni perform at a very popular club called Le Baron. Her show was lovely, but the place was really old, and seedy. It was a bordello many, many years ago, and was then a swinger club in the 70’s. Now all the models and hipsters hang there, and they arrived en masse as Lenni was finishing her show. The DJ took over, and then I learned that French people cannot dance to save their lives. I’m also hoping it was a retro night, otherwise I worry about their musical taste. It was interesting to watch these very skinny, 11 foot tall girls who were so very young get plied with liquor and god knows what else by very, very slimy looking men. I wanted to take them out of there and send them home. I think that means I’m getting old. Also, the washroom, which was only a small step above the seriously scary pay per use public stalls on the street had a powder girl! She was honestly put off when I didn’t tip her, even though I caught not one, but two men in the stall in the ladies. I think they were trading ties. I really can’t be sure.

I shared a cab home with a lovely gal named Nathalie who is Lenni’s friend. She lives in Montmartre, and is French Canadian, so she spoke excellent English. It was a very late night.

Today, I woke up at 9:00 and headed out to meet Lenni. I stopped at the Boulangerie for un pain au chocolate (which is French for “this will make you see god”) and then hopped on the Metro to Le Bon Marche. After a quick cafe at a bistro we ventured into the very first department store in Paris. What a beautiful place, but so expensive! We then went to an incredible food market, where I stocked up on some French treats to bring home, and we got a picnic which we ate in the park in true French style. I ate a lot of creamy French cheese smeared all over a fresh baguette. Now I know why I didn’t bring any pants to wear here.

Next on the agenda was the Camille Claudel exhibit at the Rodin Musem. Gorgeous. You should google Camille Claudel if you don’t know who she is. She was a student of Rodin, and in my opinion, her work was far more expressive and evocative than his. The museum used to be Rodin’s home, and it was gorgeous, with incredible gardens to wander through, filled with sculpture. I saw “The Thinker” in real life, and that was painful because every tourist who passed through had to have their photo taken sitting at the base of the statue in the same pose. God help me.
(Though, I do still think that he looks like he’s taking a complicated shit…)

After the musem, we found another bistro where we each enjoyed un Kir, which is my new big thing. Lenni and I are going to try to figure out how to create kirgaritas this summer.

I’m really not sure where we went after that. I think we were both keen to continue exploring, but we were both so damn tired from the night before. We poked into some more shops, and then plunked ourselves down at ANOTHER bistro for une autre cafe. It was 25 degrees today, and glorious, but definitely sleep inducing.

We had to part ways, and now as I sign off, I’m going to take a nap avant le dinner. I will also have to consult my travel guide because I fear that I will not be anywhere near doing all of the things I wanted to do before I leave here, and I think it’s time to hatch a plan.

Look how happy I look on my little French Balcony. Can you even imagine me returning to life in Toronto?