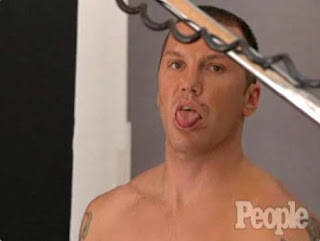 Which I still care nothing about, but I couldn’t resist digging further to discover why Sean Avery was in so much trouble. Again.

For those of you who, like me, don’t care about hockey, Sean Avery plays for the Dallas Stars. He also was dating Canadian actress Elisha Cuthbert, who is now dating the Calgary Flames’ Dion Phaneuf. (Elisha apparently likes hockey more than I do.) Sean Avery, while in Calgary, and while being interviewed by the media, went on camera saying something to this affect:

“It’s good to be back in Calgary, but there seems to be a trend in players dating my Sloppy Seconds.”

He is now suspended by the NHL for six games. His own team says they support the decision, and would have suspended him themselves if the league hadn’t.

I clearly don’t have to illustrate how crude and infantile his comment was. I would hope most of you grasp that immediately. What sent me on a Saturday morning “I hate frat boys” downward spiral was the incredibly arrogant way he said this. So cocky, and deliberate. I’m not sure if I’m alone in this response, but I could immediately conjure one or two jilted exes of mine making similar comments about me. Believe me, I don’t have many who would ever fall into that category. But ladies, we all have one or two, don’t we?

The NHL deemed his behavior appalling and anti-social. If THAT is what they consider appalling or anti-social, they would LOVE some of the cases I could present. Wouldn’t it be great if we could drag one or two boys we know before such a commission? Or, even better, if members of “their own team” were so disgusted by them, that they insist on a formal hearing?

What would punishment look like? They are suspended to six months of no dating? They get a favourite toy taken away? They are forced to walk around town with a red “A” pinned to their chest? (Guess what the A would stand for?)

I think perhaps Elisha should re-consider her love of hockey. Perhaps she could learn to drive a golf cart. You don’t hear a lot of stories about golfers behaving like complete assholes, do you?