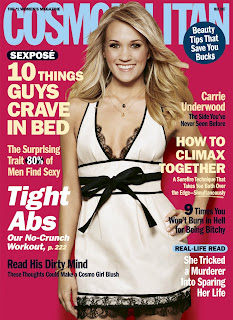 When I see a … as the subject header for an email, it can only be one person. And tonight I came home to “…” and “If it’s ok with you, I think we should have a talk at some point.”

Not having ANY CLUE what this talk may be about, I truly don’t know if it’s ok with me, but as always, curiosity has gotten the best of me. The holidays do funny things to people, and I’m prepared to let go of some anger. I have no idea what I’m in for though. It should at least make for good material.

Today I passed a billboard ad while I was on the streetcar. It was for Cosmo TV. If, like me, you think this magazine is insufferably offensive, then by the looks of their Television marketing campaign, the network will be even worse. The ad was hot pink, and featured a giant, perfectly manicured hand, which may have been holding a martini glass, with the pinkie finger extended, and a tiny little man clinging to it for dear life. Presumably “wrapped around it”. Gag. Suffragettes and bra burners everywhere must be collectively shaking their heads, and rolling in their graves. (Though in my imaginary world, suffragettes are burned so their ashes can be scattered in the wind. A deliberate choice to avenge their witchy sisters by taking back the sacred power of fire, and a defiant resistance to being trapped inside a man-made box for all eternity.)

Having a man wrapped around your finger isn’t feminism. Feminism is about EQUALITY. Coming together on an even playing field, and celebrating those unique differences that give us power of equal strength and potential. It’s an arm wrestle that ends with both wrastlers calling a draw, and enjoying a pint or two and talking about the current political climate, or world hunger.

I love that feminism has come full circle, where we have made huge inroads with issues like workplace equality and basic recognition as viable members of society, and we can now celebrate our sensuality and innate “femaleness”. I hate the current model of young woman that pop culture and the media has created. It makes my heart burn, and my ovaries want to shrivel.

I could rant endlessly about this topic. I blame a lot of it on the Madonna/Whore stigma. It’s so hard for the average person to accept a woman who is smart, and talented, and nurturing, and basically a “good girl”, but who is also deeply in touch with and comfortable with her sexuality. In men, we revere that trait. We worship icons like George Clooney, Brad Pitt, Vigo Mortensen (insert wise, powerful, sexy, paternal, strong male celebrity here) but who can we readily think of who exudes the same degree of sexuality and savvy, from the female persuasion in our modern age, who hasn’t at some point been called a whore? I immediately think of Catherine Zeta Jones, but I’ll bet she married an old man because nobody her own age could even comprehend that combination. To be honest, I don’t even know if she’s smart. I DO know Sharon Stone is MENSA smart, but still everyone thinks Basic Instinct. It was one role for god’s sake!

Paris Hilton is the ultimate representation of the type of woman pop culture has given birth to. She makes me shudder. She, Nicole Ritchie, The Olsen Twins, Britney, and that crazy, drunken lesbian who’s name escapes me right now. The one with the freckles… They should be transported to an island and left without cellular technology and credit cards. A secret camera crew could film them as they truly unravel. Eventually, I pray that they would eat each other in a orgiastic frenzy of canibalism not fit for prime time television. (This special footage could be pay-per view.)

Children starve to death every day, and these girls will choose to do it to become a perfect size “0”. Who the fuck invented size “o”? No such thing has ever existed until very recently. This is it gals. We live in a world that encourages us to aspire to “o”.

I say lube it up with a tub of Crisco and stick it where the sun don’t shine.

I don’t want big fake tits, I NEVER want to be orange, I will probably never have a hard, flat tummy, and I try to use the word “like” the way it was intended, when creating a simile or describing something I am fond of.

So, if it’s ok with you…we SHOULD have a talk at some point. I have no idea what you would like to say, but I think we both know that it’s not so easy to silence me.

How I long for the day that someone is not wrapped around my pinky, nor crushing my little hand under a steel-toed motorcycle boot, but is strong enough to hold it firmly in his own, knowing each of us can look the other square in the eye and not be so afraid.