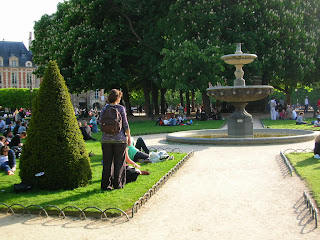 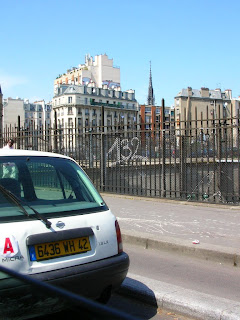 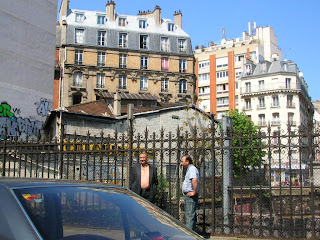 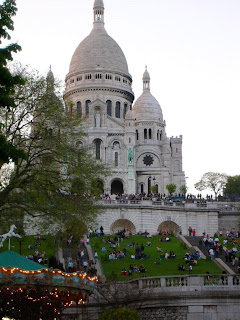 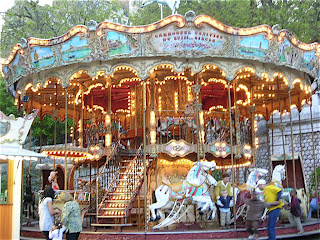 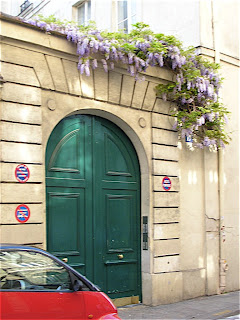 It’s 9:32 Paris time, and 3:30 Toronto time, and I’ve been up since yesterday at six a.m. I’ve spent over 12 hours trying to fly to another corner of the globe, and I’ve discovered that I can’t sleep on a plane without some kind of drug-induced stupor. Which I didn’t have this time, so this will have to be brief, because I’m crashing. How lame!

I began to gnash my teeth and give up hope of ever getting to our destination, when the French country side finally came into view from the airplane. Acres of farm land looked like a child’s elaborate play thing, perfectly pieced like patchwork. Then, a delicate spire rose from it all, as if someone had plunked a little, finely-carved chess piece atop the greenery. I gasped. It was involuntary, but there it was. In among a couple of scattered high-rise buildings dotting the landscape (which seemed very strange) was the Eiffel Tour. I got a little bit misty.

I booked it here in a taxi, where I saw the colour of the city, and the horrors of Parisian traffic unfold before me in a riotous fashion. Just as I was starting to think that all major freeways look the same around the world (The first thing I saw was Ikea!) we were burped out into Montmartre, and all of it’s wildly ethnic glory. Motorcyclists and Scooter drivers rule the streets here, and nobody is safe. Cyclists weave in and out of traffic like nobody’s business, and I didn’t see a single helmet all day long. I did however see a dude with his cat riding on his shoulders.

Montmartre is rough around the edges, but it’s mixed with the most beautiful old architecture. It feels like New York made me feel – vibrant, eager to be out among the people, and unsure of what to expect. Montmartre feels like New York’s highly romantic, very street savvy, definitely Algerian girlfriend. Perhaps you can see what I mean from the photos taken from the cab above.

Sacre Coeur is a two-minute hop, skip, and jump from my doorstep. I intend to hang out in the hood tomorrow, and will take more photos, but I gave you a little taste (before my battery died!) The carousel is at the base of Montmartre. I’ll also take photos of my courtyard tomorrow because it’s absolutely darling. The apartment is tiny, but it’s very clean, and has everything I need. Well, almost everything.

I met my lovely friend Lenni Jabour www.lennijabour.com at the steps of Opera Bastille, and she and I went for a big wander around her neighbourhood, stopping for a snack, and a Kir (a lovely little drink made with creme de cassis and white wine) at the Cafe Divan. Then we wandered to la Place des Voges www.en.wikipedia.org/wiki/Place_des_Vosges and then toured around Le Marais. Le Marais is incredible. I wish that photo of the wisteria were a little more clear. The whole area was filled with surprises like that around every corner, and people were all sprawled out together having naps in Place des Voges like an overgrown kindergarten class. I can’t even imagine that in High Park! We sniffed perfume, touched pretty clothing, went to the most meticulous home organizing store I have ever seen (my friend Amanda would die!), and then I had to bail because I could scarcely keep my eyes open. Before she left me, Lenni kindly showed me how to use the Metro, and even demonstrated how to purchase (and use) Carnets. I am now confident enough to explore on my own.

I thought I was in for the night, but my tummy is now growling, and though I am so very, very, sleepy, that tiny bistro around the corner with the flickering candles and darling little table cloths is calling my name. With a sexy French Accent.