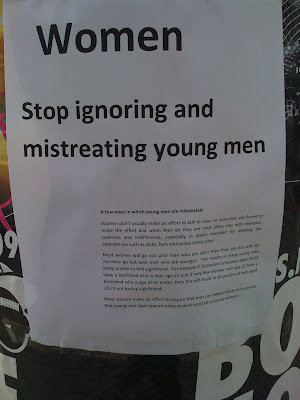 This stopped me in my tracks today, and I had to share it. It was posted on a hydro pole outside of my office. Here’s a close up, which I hope you can read: 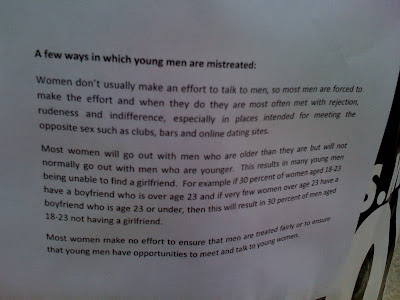 Imagine being so frustrated with the opposite sex, you had to post a public notice? If you had to write a PSA about your dating frustrations, what would that look like? I’m sure anyone who is reading this blog regularly would be able to draft mine, but here it is, just for the record.

An observation about the way women are often treated:

Men seem to really like to work their way into two things; a woman’s pants, or a woman’s head. Sometimes they try to get inside both. Very rarely are they concerned with getting inside a woman’s heart or her soul.

Once inside either pants or head, they root around a little, pick up the odd personal effect and sniff it or shake it. They will usually leave a pair of dirty socks in a ball somewhere to find later, and the second the woman gets confused and tries to show them into the heart or soul, they vacate the premises immediately and then pretend they were never there in the first place.

If 85% of men are only interested in heartless, soulless connections with women that are only based on pants-less mambos, and cerebral canasta, and 95% of women are looking for a loving committed partner who will share their life with them, this will result in a lot of lonely, angry women. These women will probably never let you in their pants, and will act stupid and boring on purpose so you don’t try to stick your fingers in their gray matter.

Most men make no effort whatsoever to ensure that women are being treated like they are more than novelty items or that women have opportunities to have their faith in the opposite sex restored.

In other news, in our country you can stab, hack up, decapitate, and eat chunks of another human being and never, ever have to serve jail time if you tell people that god asked you to do it. They’re absolutely right, that IS criminally insane!

Seems to me like it’s bed time. I think I sound a little cranky in this post.