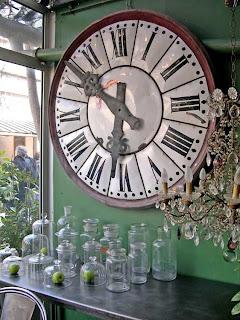 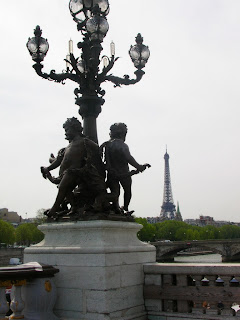 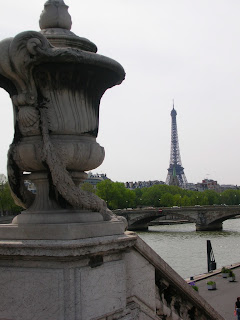 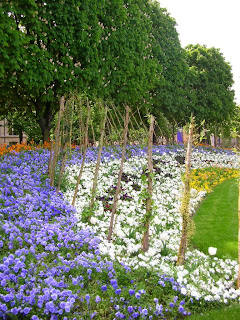 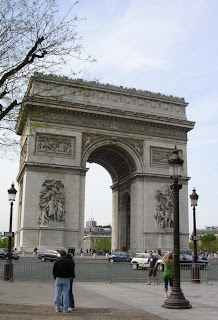 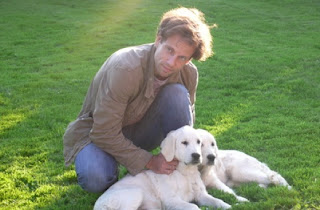 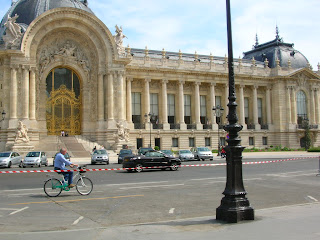 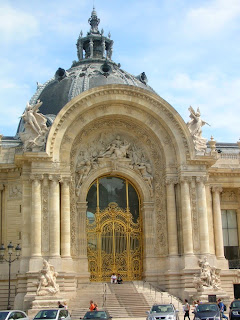 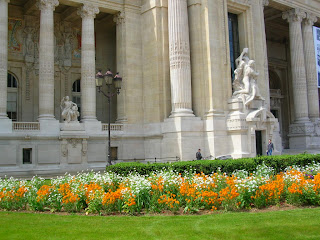 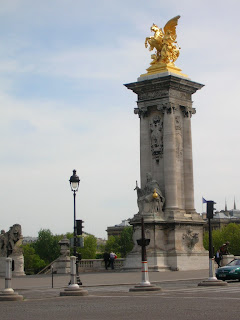 It’s only 6:30, but I had to come home for a breather and a little nap, because I am completement exhausted.

I set my alarm for eight this morning, but apparently I am un peu stupide because it didn’t go off. It seems I have finally caught up on sleep though, because I naturally woke up at 9:00 am.
I chose a fabulous little outfit, and then headed off to Les Puces de Saint-Ouen, which is actually not in Paris at all. After what felt like an epic hike through hundreds of stalls where vendors were selling complete and utter crap, I was plunked out onto a little street that was slowly coming to life. It really was antiques heaven, but I needed un cafe, so I was on the hunt for a little place to park my bum.

That’s when I met Gaetan. He is officially my first French ami. He was very friendly, and quite out of breath by the time he caught up to me on his roller blades. It turns out he’s an interior designer who makes lamps, and was trying to wheel (hahahah) and deal at the marche. He was very friendly. (Oh, I said that already). We enjoyed a nice cafe au lait and some pleasant banter, in his pretty good English, and my pretty bad French. He very kindly gave me his card, in case I was bored while I’m here and needed some company. I visited his website to make sure that the lamps aren’t made of human flesh, and found a very nice, understated photo of him, which I think is in no way designed to make women do foolish things (see above). Maman, please do not say “I told you so.”

After I sent Gaetan home, I spent several hours at the market. Everything was incredibly expensive, but I bought a metre of some beautiful fabric from the 40’s which I will turn into a blouse when I return to Toronto, and a lovely silk dress from the 60’s. There were many things that I would have like to buy, but it seems as though I have ridiculously expensive taste.

After Les Puces, I was VERY hungry, and wanted to find just the right bistro to enjoy a little meal at before heading to my next destination. I got incredibly, hopelessly lost. Eventually I came to a sign that said “Paris” which of course was pointing in the opposite direction of where I had been walking for the last 45 mins. The great thing about French men is that they are always eager to help you out, and even though I have NO IDEA what they are saying, they make a lot of big gestures with their arms. Eventually I was able to find both a boulangerie and the metro. Hooray.

I took the metro to the Champs Elysees, where I saw both the Grand and the Petite Palais. I also got to finally see the Seine, which I think will be most perfect at night, so I will return later this week, when I do my Eiffel Tour by night visit.

I then hoofed it to the Arc Du Triumph, and by now was in a great deal of pain, and seriously ravenous. I took a couple of photos, and then plunked myself down at a bistro in plain view of the Arc, where I toasted it with a glass of wine. That particular area of Paris is full of beautiful monuments, but it’s also a huge tourist area, and big shopping district for mainstream brand lable stores. Not so much my cup du the.

I have the doors to my little French balcony open, and will now rest my eyes a little before heading out to see what kind of fun I can find this evening.