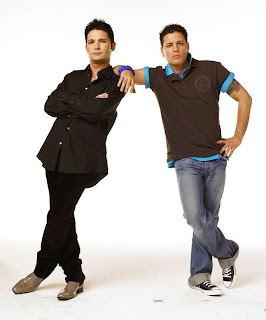 At least one of the Coreys is still recognizable.

This will be brief because I’m exhausted, and have had several sangrias today.
My dear darling mom and dad were kind enough to rent a van and deliver their guest bed for me today, so I would no longer be sleeping on the couch.
They also delivered a stack of self-help books, but I’m not going to get into that.
The point I wish to drive home (ha!) is that the bed, which I thought was a queen, is in fact a double. Now bedding manufacturers would have you believe that there’s not much difference between the two, but I’m lying in it right now, and I can tell you that this bed feels considerably different (smaller) than a queen. Which may not be so bad.
This bed gives me enough sprawling room, and could conceivably fit two if need be. The other person would have to be in very close proximity, so either they would be VERY comfortable, or uncomfortable enough that they wouldn’t want to stay long.
As far as I’m concerned, either way I win.
Goodnight Toronto.