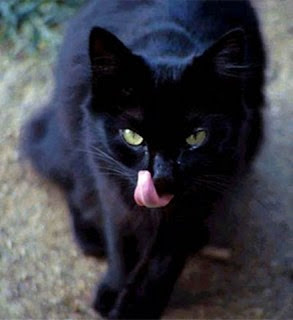 Who doesn’t love to wake up to a vigorous game of chase?

6:30 am today felt like a jolly old British farce. I was mostly asleep, and certainly alone, and Toulouse (my lover boy of the four-legged black cat variety) was curled up next to me. Toulouse is ten, and has been ten since I’ve known him. When I adopted him, I wanted a cat who knew a thing or two about life. I thought he’d be a little cool and aloof, and that we’d exist happily without getting into each other’s way, but as it turns out he’s affectionate to the point of embarrassment, and sometimes has a drooling problem.

A ten year old cat really isn’t the most playful thing, but this morning he stirred me from slumber because he very uncharacteristically pounced off the bed and went chasing down the hall. I shrugged it off and went back to sleep.

Moments later I heard him skitter through the kitchen, then the bathroom. In my sleeping brain, I thought perhaps he had a complicated bowel movement to work out. Again I returned to half-sleep.

When Toulouse returned to the bed, purring loudly, and uttered a single, victorious “Mmmrouph”. I sat bolt upright. He was half laying on me, and doing the happy foot dance. It’s quite overcast this morning, so still rather dark in here, but I reached for my glasses because I began to experience a cold wave of dread washing over me. Toulouse lowered his head and then suddenly snapped out first his left paw, then the right. Then he was shaking his head vigorously from side-to-side. Instantly, I was “someone-threw-a-bucket-of-cold-water-on-me” awake. I pushed him off the bed, and moved quickly to the bathroom to get my glasses, which I usually keep at the bedside for exactly these kinds of “I need to see” emergencies.

I turned on the lamp, and Toulouse was now on the floor, his mouth full, and a single, sinewy strand dangling from his lips.

“Memmerouph!” he announced, dropping the object at my feet.

And there, before me, was the very reason Toulouse came to live here. Une petite souris. Still quite alive. Being pawed about and munched on my my handsome chat. Seconds ago this was happening in my bed. On me, in fact.

When Toulouse catches mice, he doesn’t leave a corpse. It’s part of his charm. The only reason I know he’s holding up his end of the bargain is that he likes to sometimes leave a tail, or a small pile of entrails. These items are like the slides that Dexter creates after each kill, but they are offerings to me, and not his own personal trophies because Toulouse is a giver.

Discovering him with a fresh catch meant that I would have to watch Toulouse play with it (apparently he really likes pretending to set it free into piles of my discarded clothing and then watches it scurry around again before he pounces on it once more. I’ve known men like that.) and then he sets about eating it.

I got a pot from the kitchen. And a lid. The next half hour was spent trying to get the mouse into the pot without allowing it to touch me. Toulouse loved this, which in hindsight is very bad, because I fear it now means that he thinks I’ve invented a delightful game for the two of us to enjoy. He returned to the bed with his kill, which is where I found him once I had the pot in hand. He was allowing the mouse to scamper across my bed covers, which really sent me to gagging.

I’m not afraid of mice. I’ve lived with them before. It’s just one of those things you deal with when you live in the country. My relationship with mice changed though when one of them ran up my arm while I was scooping into a particularly huge bag of dog food. The deeply troubling thing about mice is how they move. So, so fast. There is something instinctive in us, that when we see those naked little tails scooting around, we need there to be a great deal of distance between us and the owners of these tails. Somewhere deep inside me lived a primal fear that one day the cat would bring a mouse into my bed, while it was still alive, and while I was still sleeping. That day was today, and I survived.

My mother wouldn’t have. She is pathologically afraid of mice. Like, tears in her eyes hysteria at the mere sight of them. Recurring nightmares in which she catches them doing things like wearing her wedding dress defiantly. In fact, if she reads this I know she will have a hard time ever coming to my house again.

This morning, though really an unpleasant way to wake up, was another life lesson learned in the Fortress of Solitude. I’m stronger than I think, and capable of dealing with more than I give myself credit for.

I finally caught the mouse under the glass lid of the pot. Toulouse loved this because it began to run around the inner periphery and he kept slapping the top with his paw. I then swallowed hard, took a breath and flung the little mouse into the pot with the lid in one very quick flick of my wrist. I carried him outside to the patio, where my naked self deposited him into the rain. He wasn’t moving when I began this entry. I hope to hell that he’s gone now. I imagine mouse bones are fairly fragile things. Between Toulouse and I, I don’t think he was in very good shape.

Toulouse was cross with me for getting rid of his new toy. He protested loudly, and I scratched his chin. I looked him in the eyes and said “If you ever, EVER bring one of your little playthings into MY bed again, your ass is back on the streets.” I really hope that I was clear in my intent.

Before I head to the laundromat to wash all of my bedding, I will say one thing – I’m pretty sure I can hang up a towel bar myself. Things like YouTube and my own fierce ability to switch into problem-solving mode will facilitate this. Thanks anyway cute boy with a drill, you are still welcome to turn up here with your tool belt some time in the not-so-distant future.